This note is about a recent paper that was making rounds on the internet yesterday:

The method is simple yet powerful, and it is perhaps a bit surprising and conter-intuitive: it learns representations by mapping data to to randomly sampled noise vectors. The authors call the methods noise-as-target (NAT).

In this post, I'm going to assume you've at least skimread the paper and may have been left wondering what really is going on here. I will only add my perspective on it: I re-interpret the algorithm as a proxy to information maximisation. I think that if you start thinking about the algorithm it from this perspective, perhaps it becomes less surprising that the method actually works.

In variational autoencoders, this $p_{Z\vert X, \theta}$ would be called the encoder or recognition model or amortized variational posterior. But, importantly, we now work directly with the encoder, without having to specify a generative distribution $p_{X\vert Z;\theta}$ explicitly.

The InfoMax principle says that a good representation is compact (in terms of it's entropy) while it simultaneously retains as much information about the input $X$ as possible. (see e.g. Chen et al, 2016 - InfoGAN, Barber and Agakov, 2003). This goal can be formalised as follows:

where $\mathbb{I}$ denotes mutual information and $\mathbb{H}$ the Shannon's entropy. I also introduced the following notation for distributions:

In real-valued spaces, this optimisation problem can be ill-posed, and it has a few problems:

To address these problems, we can make the following changes:

This loss function makes a intuitive sense: you are trying to map your inputs $x_n$ to values $z_n$ on the unit sphere, potentially in a stochastic fashion, but in such a way that the original datapoints $x_n$ are easily recoverable (under the log-loss) from $\tilde{z}_n$ which is a noisy version of $z_n$ . In other words, we seek a representation that is in some sense robust to additive noise.

It is not hard to show that if there is at least a single representation $p_{Z\vert X;\theta}$ which has the following two properties:

then this $p_{Z\vert X;\theta}$ is a global maximizer of the InfoMax objective.

Marginally, Z will have uniform distribution on the unit sphere, and it is also a deterministic mapping, therefore $Z$ is a maximum information representation and it is equally good for any orthogonal $A$.

I showed that the noise-as-targets (NAT) representation-learning principle can be interpreted as seeking InfoMax representations: representations of limited entropy that retain maximum information about the input data in a way that is robust to noise. A similar information-maximisation-based interpretation can be given to Exemplar-CNNs (Dosovitsky et al, 2014) which work by trying to guess the index of a datapoint from a noisy version of the datapoint. These algorithms often look very odd and counterintuitive when you first encounter them, reinterpreting them as information maximisation helps demistify them a bit. At least I think it helps me.

The difficulty in implementing the earth mover's distance in this literal form is that you need to find the optimal assignment between the two empirical distributions and that scales as $O(N^3)$ in the number of samples $N$. To sidestep this, the authors propose a 'stochastic' update to the optimal assignment matrix whereby the pairings are only updated one minibatch at a time.

Not that I expect this to be a big deal, but it's worth pointing out that this algorithm is prone to getting stuck in local minima. Let's assume parameters of the representation $\theta$ are fixed, and the only thing we want to update is the assignments. Let's consider a toy situation illustrated in the figure below: 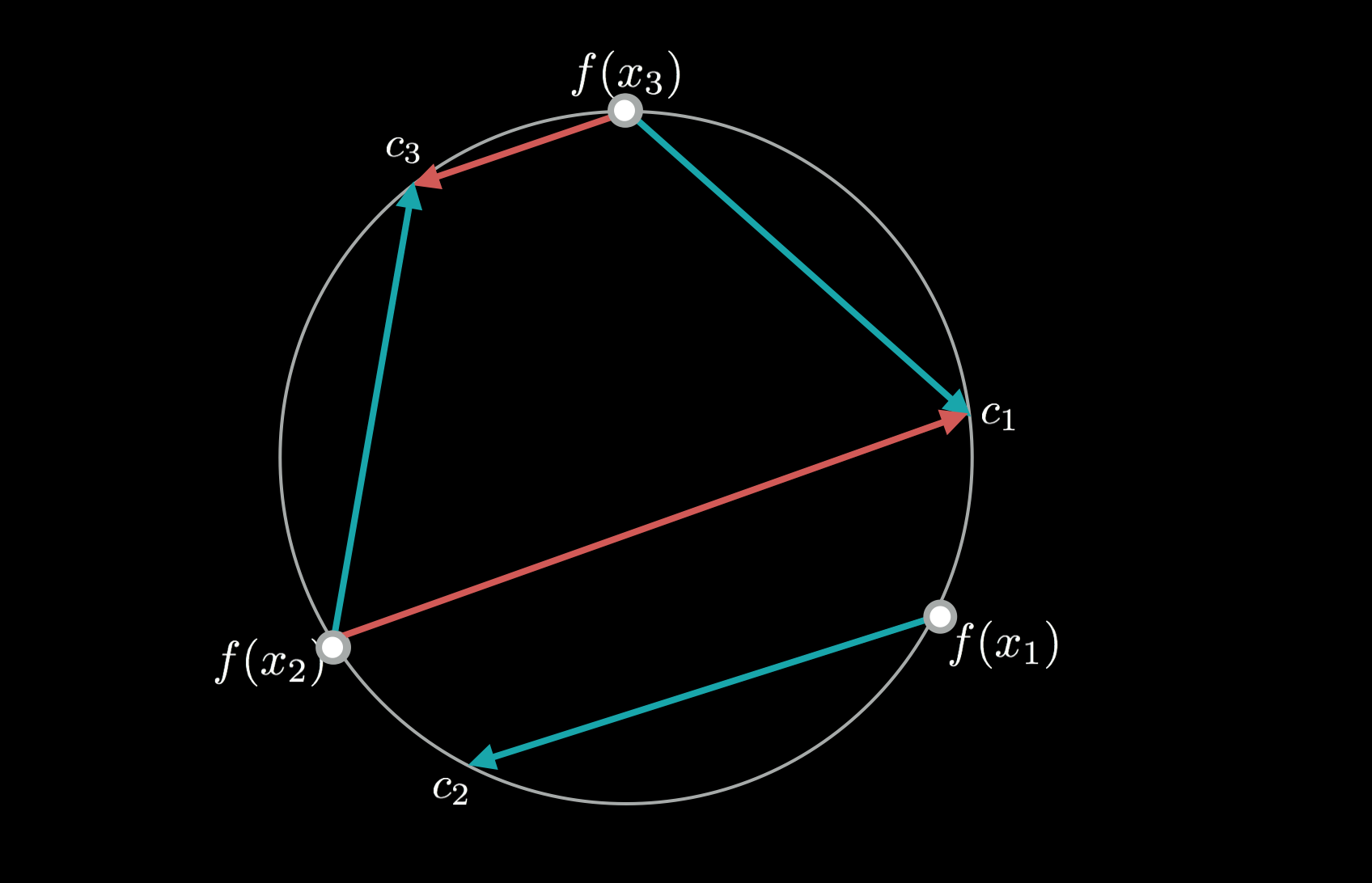 Consider three datapoints $x_1, x_2, x_3$, whose embeddings are equidistant and lie on the 2D unit sphere (my Mom - or any sane person - would probably call this a circle). Also consider three possible noise assignments $c_1, c_2, c_3$ which are also equidistant as shown. The optimal assignment would clearly pairing $x_1$ with $c_1$, $x_2$ with $c_2$ and $x_3$ with $c_3$. Let's assume our current mapping is suboptimal as shown by the blue arrows, and we are only allowed to update the assigmnent on minibatches of size 2. On a minibatch of size 2, there are only two possibilities to consider: either keep it as it was before, or swap things around, which is shown by the red arrows. In this toy example, keeping the previous assignment (blue arrows) is preferable to switchinig (red arrows) under the squared loss. Hence, the minibatch-based algorithm gets stuck in this "local minimum" with respect to minibatch updates.

This is not to say that the method doesn't work, especially as $\theta$ is also simultaneously updated, which may actually help getting the algorithm out of this local minimum anyway. Secondly, the larger the batchsize, the harder it may be to find such local minima.

The way to think about local minima of this stochastic Hungarian algorithm is to think of it as a graph: each node is a state of the assignment matrix (a permutation), and each edge corresponds to a valid update based on a minibatch. A local minimum is a node which has a lower cost than any node in its immediate neighbourhood. If we consider minibatches of size $B$, with a total sample size $N$, there will be $N!$ nodes in the graph and each node will have an out-degree of ${N \choose B}B!$. Therefore, the probability of any two nodes being connected will be $\frac{1}{(N-B)!}$. As we increase the batchsize $B$, the graph gets more and more connected, so local minima start to disappear.