Generative Adversarial Networks (GANs) are notoriously hard to train. In a recent paper, we presented an idea that might help remedy this.

Our intern Casper spent the summer working with GANs, resulting in a paper which appeared on arXiv this week. One particular technique did us great service: instance noise. It's not the main focus of Casper's paper, so the details have been relegated to an Appendix. We thought it's a good idea to summarise it here, giving a few more details. Naturally, I think the full paper is also worth a read, there are a few more interesting things in there:

There are different ways to think about GANs: you can approach it from a game theoretic view of seeking Nash equilibrium (Salimans et al, 2016), or you can treat it as an E-M like iterative algorithm where the discriminator's job is likelihood ratio estimation (Mohamed et al, 2016, Uehara et al, 2016, Nowozin et al). If you've read my earlier posts, it should come as no surprise that I subscribe to the latter view.

If $q_\theta$ and $p$ are well-conditioned distributions in a low-dimensional space, this algorithm performs gradient descent on an approximation to the KL divergence, so it should converge.

So why don't they?

Crucially, the convergence of this algorithm relies on a few assumptions never really made explicit that don't always hold:

In the paper we argued that in real-world situations neither of these holds, mainly because $q_\theta$ and $p$ are concentrated distributions whose support may not overlap. In image modelling, distribution of natural images $p$ is often assumed to be concentrated on or around a lower-dimensional manifold. Similarly, $q_\theta$ is often degenerate by construction. The odds that the two distributions share support in high-dimensional space, especially early in training, are very small.

If $q_\theta$ and $p$ have non-overlapping support, then

How to fix this?

The main ways to avoid these pathologies involve making the discriminator's job harder. Why? The $JS$ divergence is constant locally in $\theta$, but it doesn't mean that the variational lower bound also has to be constant. Indeed, if you cripple the discriminator so the lower bound is not tight, you may end up with a non-constant function of $\theta$ that will roughly guide you to the right direction.

An example of this crippling is that in most GAN implementations the discriminator is only partially updated in each iteration, rather than trained until convergence. This extreme form of early stopping is a form of regularisation that prevents the discriminator from overfitting. 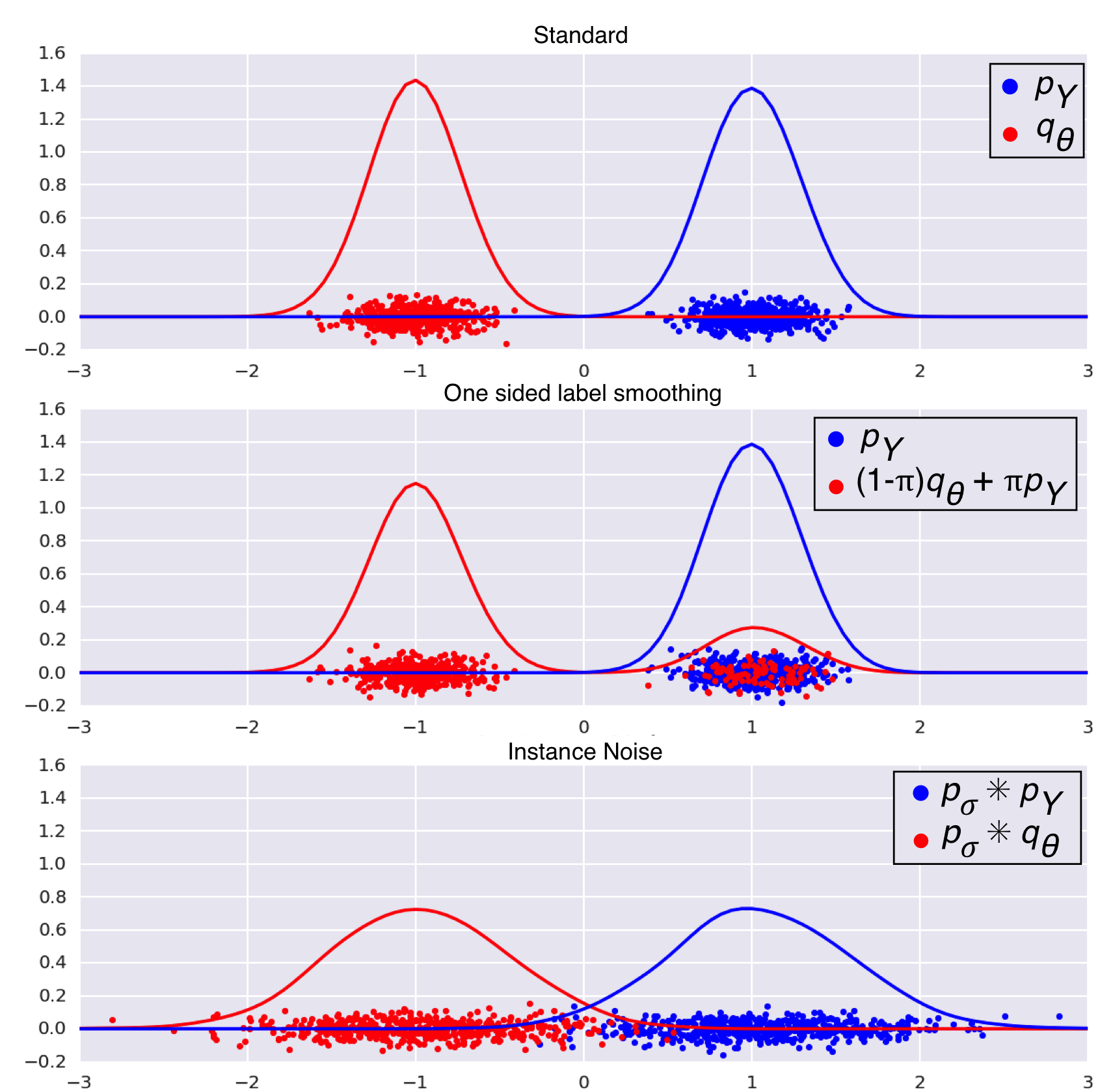 In the middle panel we show the effect of \emph{one sided label smoothing} or equivalently, adding label noise. In this technique, the labels of some real data samples $x\sim p$ are flipped so the discriminator is trained thinking they were samples from $q_\theta$. The discriminator indeed has a harder task now. However, the likelhiood ratio $\log \frac{p}{(1-\pi) q\theta + \pi p}$ is still not well-defined. Also, although discriminators have a harder job, they are all punished evenly: there is no way for the discriminator to be smart about handling label noise. Adding label noise doesn't change the structure of the logistic regression loss landscape dramatically, it mainly just pushes everything up. Hence, there are still a large number of near-optimal discriminators. Adding label noise still does not allow us to pinpoint a single unique Bayes-optimal classifier. The JS divergence is not saturated to its maximum level anymore, but it is still locally constant in $\theta$.

An alrernative way to think about instance noise vs. label noise is via graphical models. The following three graphical models define joint distributions, parametrised by $\theta$. The GAN algorithm tries to adjust $\theta$ so as to minimise the mutual information between the highlighted nodes in these graphical models:

Here's what the variables are:

In this joint distribution, vanilla GANs minimise is the mutual information $\mathbb{I}[x,y]$ which corresponds to JS divergence. If the distributions of $x_{fake}$ and $x_{real}$ have no overlap, $y$ is a deterministic function of $x$ and therefore the mutual information is maximal. Hence, in this scenario, the objective function is theoretically constant in $\theta$.

The second panel shows the effect of label smoothing, or, adding label noise. Now the discriminator is trained on randomly flipped labels $\tilde{y}$ instead of the real labels $y$. The GAN algorithm can be thought of as trying to minimise $\mathbb{I}[x,\tilde{y}]$. It is not hard to see that, in situations where $y$ is a deterministic function of $x$, then this mutual information is also constant with respect to $\theta$.

In the instance noise trick, the discriminator sees the correct labels $y$, but its input is the noisy $\tilde{x}$. We think that $\mathbb{I}[\tilde{x},y]$ is a much better objective function to target. Even when $\mathbb{I}[y;x]$ is saturated, $\mathbb{I}[\tilde{x},y]$ still depends on $\theta$ in a non-trivial and meaningful way. If the noise distribution $p_\sigma$ is something like a Gaussian, adding noise can be thought of as a way to measure how far away $q$ and $p$ are from each when they don't overlap.

Finally, there's a way to understand label noise from the perspective of minimising divergences. Using a GAN algorithm we can construct algorithms that minimise the following family of divergences:

We tried this technique in the context of GANs for image superresolution, and we found it stabilises training, as predicted. We used additive Gaussian white noise whose variance parameter $\sigma$ we annealed linearly during training. The figure below shows that the discriminator's performance is kept in check by the added noise throughout training: 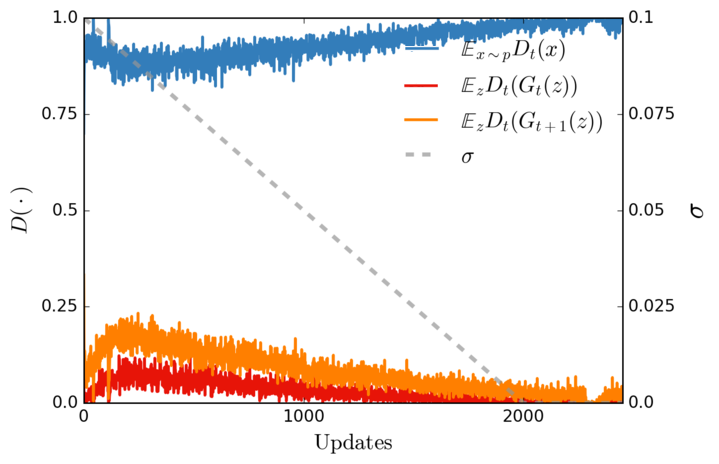 Another way to show that convergence is happening is to look at the average SSIM and MSE values during training. This is only possible because we trained the network for superresolution, so we actually always had a ground truth image to compare to. Both metrics improve steadily as the figures show: 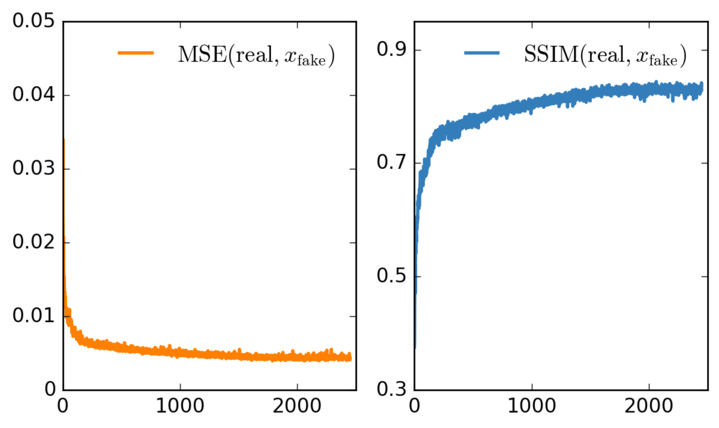 Instance noise is a theoretically motivated way to remedy the poor convergence properties of GANs. We have not tested it extensively in the context of generative modeling, but we think it should help there also. Let us know if you have any experience with similar techniques.