I wrote this post in response to a challenge by Roger Grosse:

Theorem 2 of my moment averaging paper is one of the most surprising mathematical results I've seen in machine learning. The proof is very short, but I still have no intuition for why it's true. $500 reward for a clear & convincing intuitive explanation.https://t.co/WjAMg3qIRm

As a consequence of responding to a question, this will be a bit of an obscure post, and it may not be very meaningful outside the context of annealed importance sampling. Nevertheless, the post gives me a chance to talk about some interesting aspects of Bregman divergences, exponential families, and hopefully teach some you some new things you may not have come across before.

If you look further down the thread below Roger's email, it seems @AIActorCritic started answering the question in terms of duality of parametrizations - my post also generalizes things along the lines of duality but goes into a bit more detail.

Context: the authors analyze the bias of an Annealed Importance Sampling (AIS) estimator, whose goal is to estimate the normalizing constant of an intractable distribution $p$. AIS constructs a path in the space of probability distributions starting from a tractable distribution $q$ and ending at $p$ via a sequence of intermediate distributions $q=p_0,p_1, \ldots, p_{K-1}, p_K=p$. This path is then used to construct an estimator to the log-partition function (normalizing constant) of $p$. Crucially, the bias of this estimator depends on, among other things, the particular path we take between the two distributions: there are multiple paths between $q$ and $p$, and these paths can result in lower or higher bias. Under some simplifying assumptions the bias is given by:

It is not hard to show that as $K\rightarrow \infty$, this bias vanishes, but what the paper looks at is its precise asymptotic behaviour, with the main insight being Eqn (4):

So the question is: why are these two paths equivalent in this sense? The answer might lie in convex conjugate duality.

The first observation we can make is that Eqns. (18) and (19) do not only show that the two paths are equivalent, they also shows that the cost can be expressed in terms of the symetrized KL divergence (sometimes called the Jeffreys divergence) between the endpoints:

To prove this, one can simply use the following formula for the $KL$ divergence between two exponential family distributions with natural parameters $\eta'$ and $\eta$:

Any convex functional $H$ over a convex domain induces a Bregman divergence, defined between two points $p$ and $q$ as:

$$
D_H(p|q) = H(p) - H(q) - \langle\nabla H(q), p-q \rangle,
$$
where $\langle\rangle$ denotes inner product. I used this notation rather than vector product to emphasize the fact that $p$ and $q$ might be functions or probability distributions not necessarily just finite dimensional vectors. In what follows I switch back to usual vector notation.

We can replace the KL divergence in $\delta$ by an arbitrary Bregman divergence, which yields the following generalization of Eqn. (4):

This final expression is the symmetrized Bregman divergence between the endpoints of the path $p_1$ and $p_0$, a generalization of the symmetrised KL that we found before.

Before showing how this general result is useful to explain the equivalence of Eqns. (18) and (19), I want to take some time to draw some pretty pictures visualizing Bregman divergences, the quantities we are dealing with are.

A bit of graphical intuition

Below is a graphical illustration of a Bregman divergence between two points $p$ and $q$ with respect to some convex potential $H$. 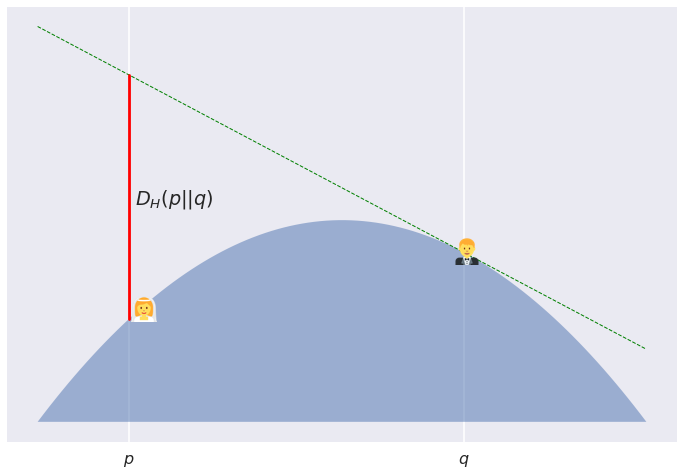 Here's the story: Poppy and Quentin are about to get married. It is bad luck to see each other all dressed up before the wedding. Therefore, they decide to spend the morning on a convex hill (convex from the top). Poppy is at coordinates $p$ and Quentin at $q\neq p$ . The surface of the hill is described by $-H$ where $H$ is a convex function. Precisely because the hill is convex, Quentin can't see Poppy, not unless she starts jumping. The Bregman divergence describes the safe height Poppy is allowed to jump up without Quentin seeing her. The more hilly the hill - higher the curvature - between them, the higher Poppy can jump without being seen by Quentin.

For this figure I used a boring parabolic hill, $-H(p) = p(1-p)$. The resulting divergence actually ends up symmetric and is simply proportional to the squared Euclidean distance $(p-q)^2$: 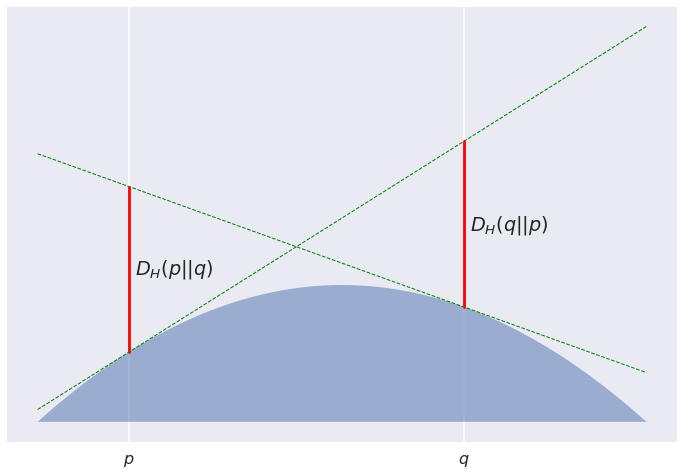 But this is an exception, rather than the rule: most Bregman divergences are asymmetric. For the convex function $H(p) = p(1-p^3)$, this is what the picture looks like: 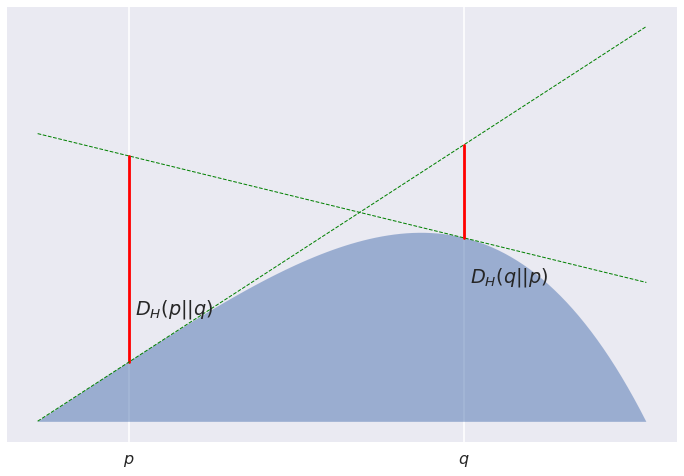 OK, so what did we just prove before? Consider we have a sequence of bridesmaids equally placed between Poppy and Quentin... Actually, let's stop the wedding analogy before it's too far. 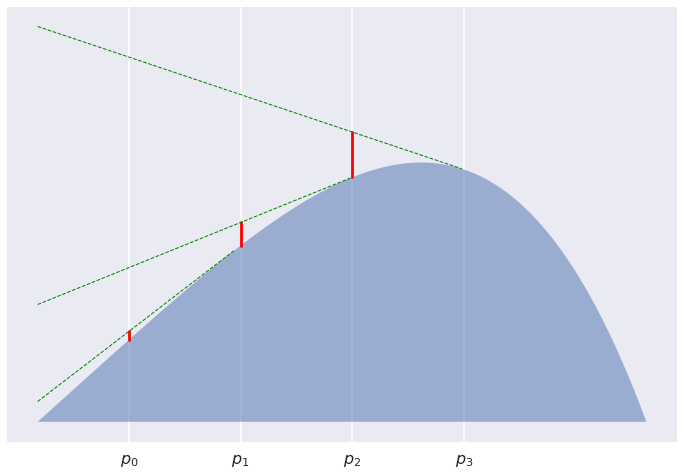 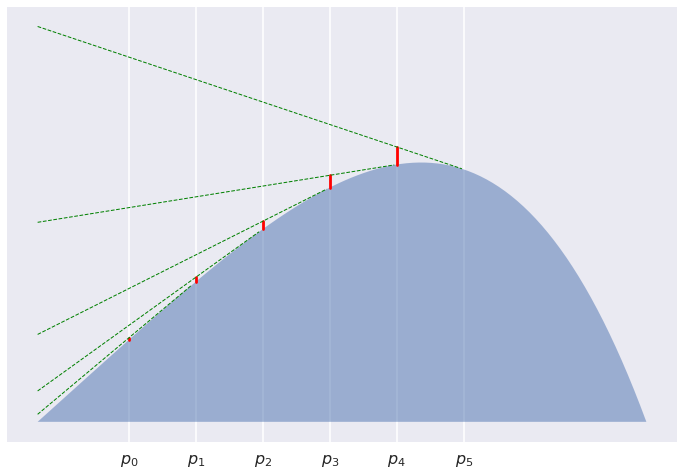 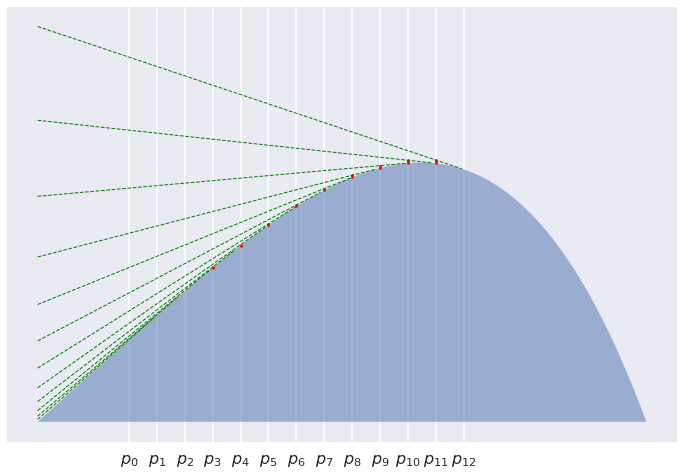 It is pretty clear that the line segments get shorter and shorter, and indeed their sum converges to $0$. What we have proved is that asymptotically this sum behaves like $\frac{1}{2K}\left(D[p|q] + D[q|p]\right)$. Why this is the case is still a mistery to me, and I don't know how to even visualise this. But I wouldn't be surprised if there turned out to be a good reason for this.

After a bit an excursion into visualising Bregman divergences in one dimension, let's go back to the question of why linear interpolation in natural parameter-space or moment space gives the $\mathcal{F}(\gamma)$. The answer lies in duality.

With an understanding of duality, let's look at the formula that we obtained before:

Let's now consider an exponential family of the form:

where $A(\eta)=\log\mathcal{Z}(\eta)$ is the log partition function. As $A$ is a convex function of $\eta$, we can define a Bregman divergence in the coordinate system of natural parameters $\eta$ induced by the (convex) log-partition function $A$:

The dual parameter corresponding to $\eta$ turns out to be the moments parameters $s$:

The equality in the middle is a well-known property of exponential families, the proof is similar to how you would obtain the REINFORCE gradient estimator, for example. Using this equality we can rewrite the divergence above as:

As it turns out this convex conjugate $A^\ast$ is the negative Shannon's entropy of the distribution parametrized by its moments $s$ (it's beyond this post to show this, see e.g. this book chapter.

So now we have two Bregman divergences, one in the primal space of $\eta$ and one in the dual space $s$. These two divergences are equivalent, and in this case they are also both equivalent to the Kulback-Leibler divergence between the corresponding distributions:

So, putting these things together, we can now understand why Eqns. (18) and (19) give the same result. If we interpolate linearly in primal space between $\eta(0)$ and $\eta(1)$ we get that the loss of the path is:

Similarly, interpolating between $s(0)$ and $s(1)$ in moment space we obtain:

And by the duality of the $A$ and $A^\ast$ we get that the two are equal, and also equal to the symetrized KL divergence between the distributions.

Interestingly, this equivalence also suggests that linear interpolation in the distribution space, $p(\beta) = \beta p_1 + (1 - \beta) p_0$, would also give the same result. This would interpolate between $p_0$ and $p_1$ via mixtures between the two distributions. This option may not be of practical relevance though.

This framework might allow us to study linear interpolation in parameter spaces which are related to natural parameters by a convex operation. So long as $f$ is invertible and $f^{-1}$ has a positive definite Jacobian, we can define a Bregman divergence in $\theta$-space using the convex function $f^{-1}\circ A$. I'm not sure if this would actually work out or whether this would yield any insights.

This was my attempt at providing more insight into Theorem 2 of Roger's paper he found very surprising. My post probably does little to make the result look less surprising, it merely shifts the surprise elsewhere. The story goes as follows: