In my last post I conveyed my enthusiasm about evolution strategies (ES), and particularly the highly scalable distributed version. I have to admit, this was the first time I had come across this particular formulation, and unexpectedly, people were quick to point out a whole body of research that I probably should have read or known about.

Here, I want to highlight two such papers:

And I also highly recommend David's blog post. This post is just a summary of what I've learnt about ES, a bit of an addendum to last week's post. Thanks to David Barber, Olivier Grisel and Nando de Freitas for their comments and pointers.

In optimisation we seek the global minimum of a function. The value of the minimum can be upper bounded by minimum over average function values as follows:

This is pretty easy to prove: the average (convex combination) of a set of numbers can never be lower than the lowest number in that set.

So, instead of optimising $f(x)$ w.r.t. $x$, one can optimise $J(\theta,f)$ with respect to $\theta$. Staines and Barber call this Variational Optimisation (VO), a name I much prefer to evolution strategies (ES). Crucially, even if $f$ itself is non-differentiable, $J(\theta)$ might be. This means it makes sense to run gradient descent on it. The gradient $\nabla_\theta J(\theta,f)$ itself can be conveniently expressed as:

It's easy to show that when $p$ is an isotropic Gaussian with fixed covariance, the VO gradient w.r.t. $\theta$ looks exactly like our gradient estimate in vanilla evolution strategies. But what's cool about the VO formulation is that it also provides a meaningful farmework to optimise the perturbation variance $\sigma^2$, or indeed any other parameter of the sampling distribution.

Let's consider seeking the global minimum of a 1D function, such as the sinc: 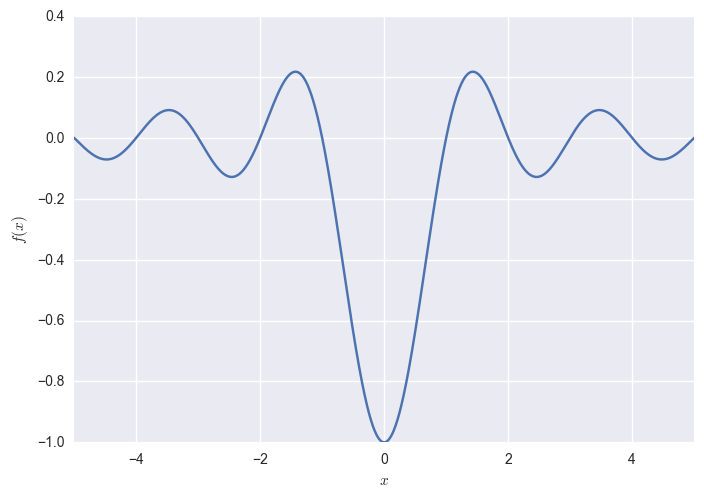 Now consider minimsing $J(\theta) = \mathbb{E}_{x\sim p(x\vert \theta)}f(x)$ using a Gaussian $p(x\vert \theta)$, whose parameters are $\theta = [\mu, \sigma]$. We have turned our 1D optimisation problem into a 2D one where the objective function looks like this: 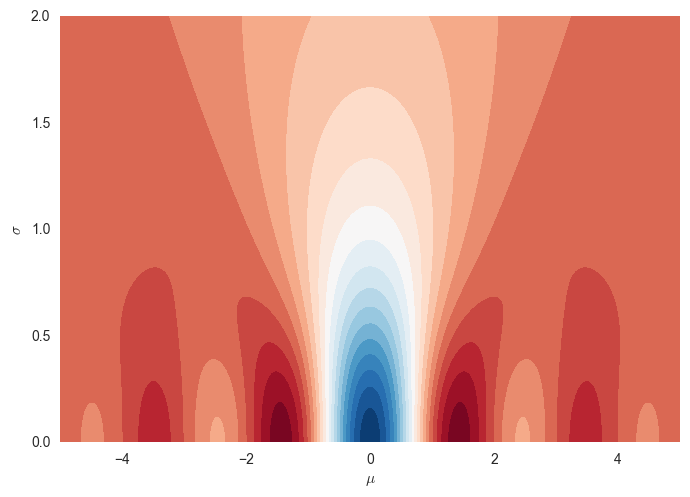 For $\sigma\rightarrow0$ the function is the same as the original $f$, and as you increase sigma, the function starts looking more and more like a constant.

Now consider a non-differentiable function such as a quantized sinc: 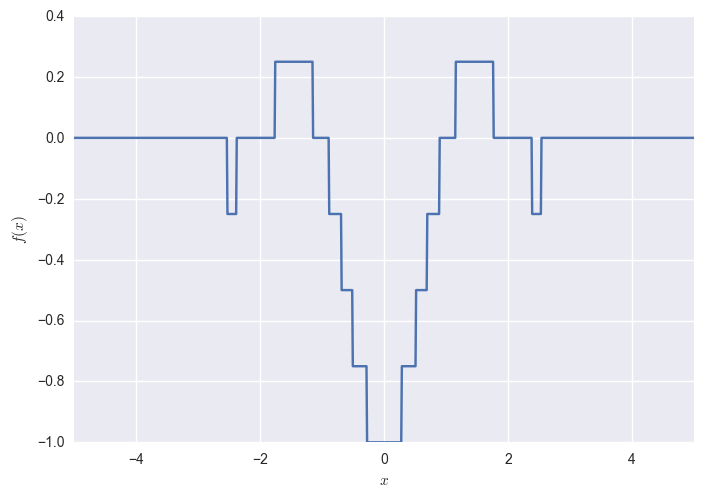 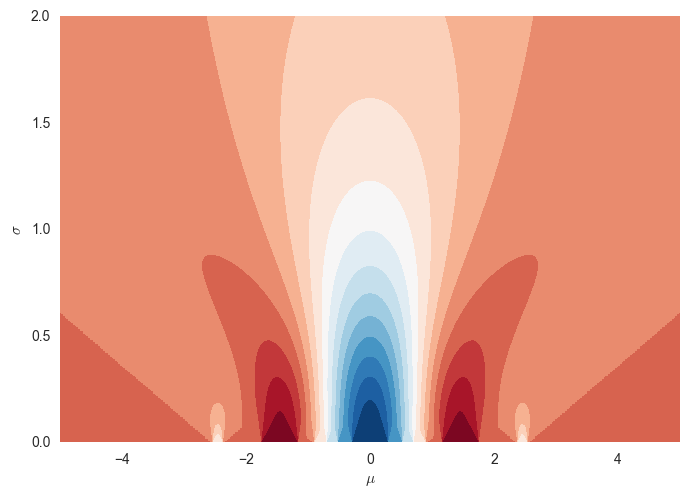 In fact, the two bounds look very similar except here you get increasingly non-differentiable behaviour as you decrease $\sigma$.

What if you don't adjust $\sigma$

What if you keep $\sigma$ fixed in ES? What kind of problems can it cause? Consider minimsing the following function: 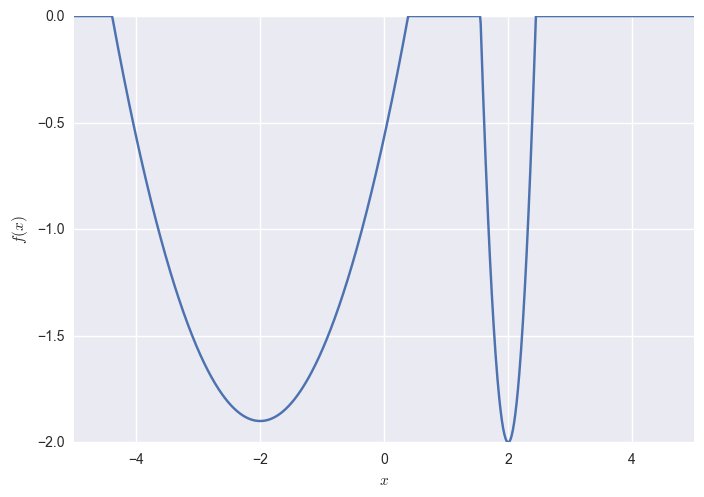 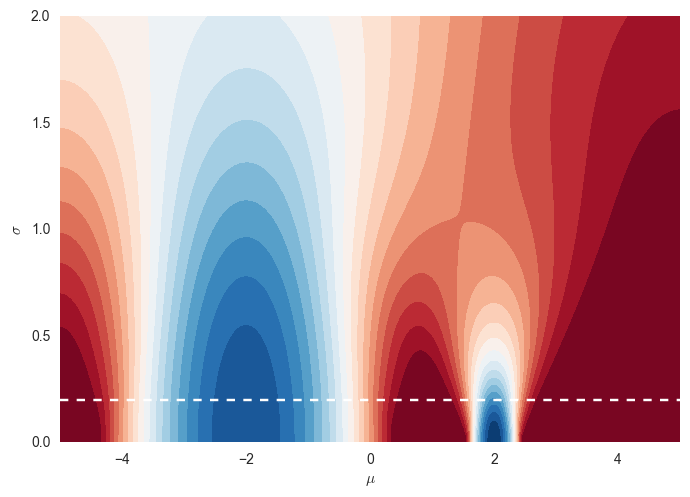 The global minimum of this objective is at $\mu=2, \sigma\rightarrow 0$. However, if you consider a fixed $\sigma=0.2$ (shown above by white dashed line), the global optimum of that function is now at $\mu=-2$. 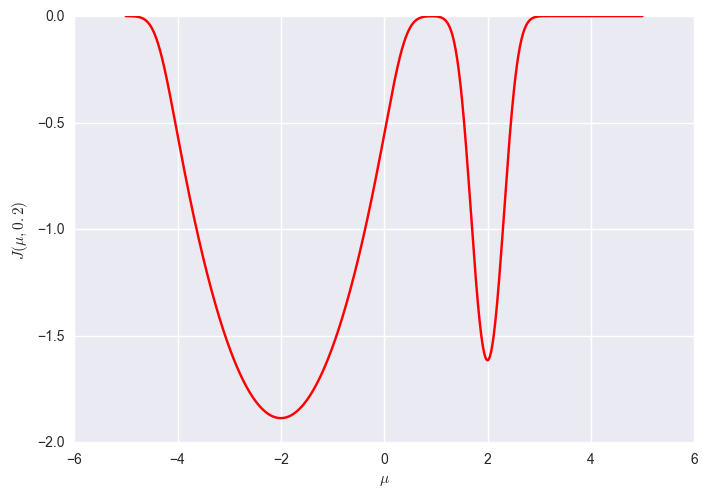 generally speaking, Gaussian VO might bias you towards local minima with low curvature compared to lower local minima but with higher curvature.

VO, however, would behave differently for different $p(x\vert \theta)$, as in VO you multiply your function output by the score $\frac{\partial}{\partial \theta} \log p(x\vert \theta)$. Consider a Laplace distribution $\log p(x\vert \theta) \propto -\left\vert \frac{x - \mu}{\sqrt{2}\sigma } \right\vert$. Under the Taylor-approximation view you could still step in the direction of:

However, VO would take a gradient step in the direction of:

I personally prefer the latter as at least it's easier to think about making the upper bound tighter than it is to think about reducing the bias of gradient estimates. Which is, of course, the real benefit of VO is that you can adjust $\sigma$ and other parameters in a principled way.

One practical problem with letting VO adjust $\sigma$ is that the optimisation may have a hard time actually converging. As the figures above show, to reach the global minimum of $J$ the optimisation procedure needs to converge into an increasingly narrow tunnel. Not only that, as $\sigma$ decreases, the variance of our Monte Carlo estimates of $\nabla_\theta J(\theta)$ also increases. The paper itself gives a more precise example of what is going on, although be careful as I think some of the equations in Section 2.2 are missing a few terms.

We can do several things to mitigate that, the natural ES paper (thanks to Olivier Grisel for pointing it out) proposes using natural gradient descent on the VO objective. If you can do this, it solves both the narrow tunnel problem and the exploding gradient variance problem. However, natural gradients requires calculating the Fisher information matrix, which is simply too large for general high-dimensional Gaussians. In practice, just using Adam on top of VO might be enough to mitigate these convergence issues of SGD.

It's also worth pointing out that doing natural gradients on $J$ is not the same thing as using VO to do natural gradients on $f$. Natural ES involves using the Fisher information matrix of $p(x\vert \theta)$ which is independent of the function $f$. Natural gradient on $f$ would involve calculating the Fisher information matrix of a predictive model inside $f$. That said, there may be some connections between Gaussian VO an performing 2nd order optimisation of f - but that's irrespective of whether we do natural ES or not.